I never thought I’d be a contributor to an off-roading magazine, but I am! 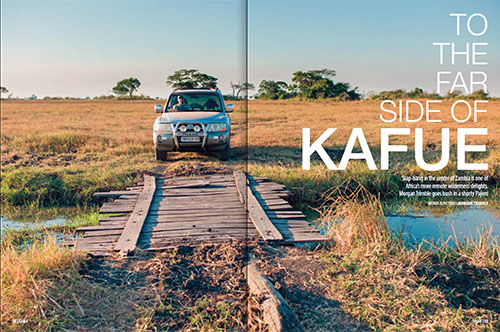 My feature on road-tripping through Zambia’s Kafue National Park hit news stands in March. You can read it here. I was thrilled to finally see this piece published and very happy that plenty of my photos made the cut–19 to be exact! These included two full-page spreads: the article opening above and the mag’s table-of-contents page. They looked fantastic in print!

The lead goes: “Slap-bang in the centre of Zambia is one of Africa’s more remote wilderness delights. Morgan Trimble goes bush in a shorty Pajero…”

For the uninitiated, “shorty” refers to a short wheelbase, two-door setup, and a Pajero is a model of Mitsubishi SUV.

The article tells the story of Ashley and my road-trip last year to visit a colleague in Kafue for a research project. Besides plenty of science-ing, we managed to get some time to explore the park and incredibly, got permission to camp in the remote Busanga Swamps.

This area is mostly off-limits on self-drive safaris because the only lodges in the area are very upscale (~$900 per person per night) and only operate a few months of the year. We were so thankful to get permission to camp for free in our puny pop-up tent at one of the out-of-season lodges. So, we had the best wildlife area in the whole park to ourselves. 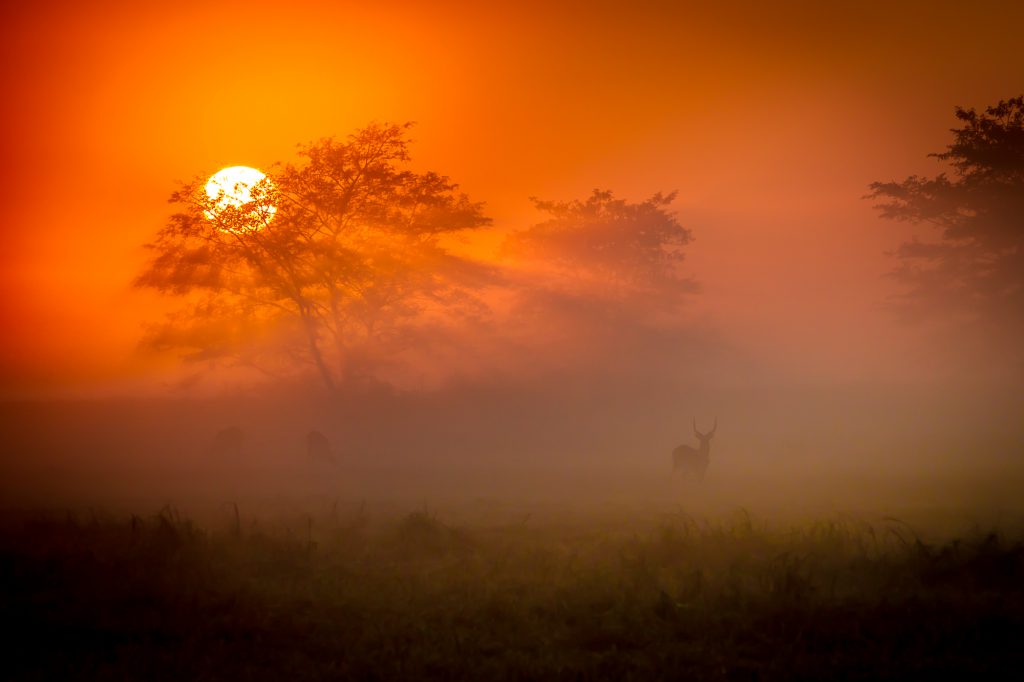 This is also one of the best photographic destinations I’ve been to in Africa. The early morning mist was truly breathtaking. In fact, one of my shots from the Swamps won me the title of Sunday Time’s Wildlife Photographer of the Month and R5,000. Not bad.

Being left to our own devices in a very large wilderness area was both great and a little scary. We had a few issues with the car that put our skills to the test, and we had a very close encounter with lions. 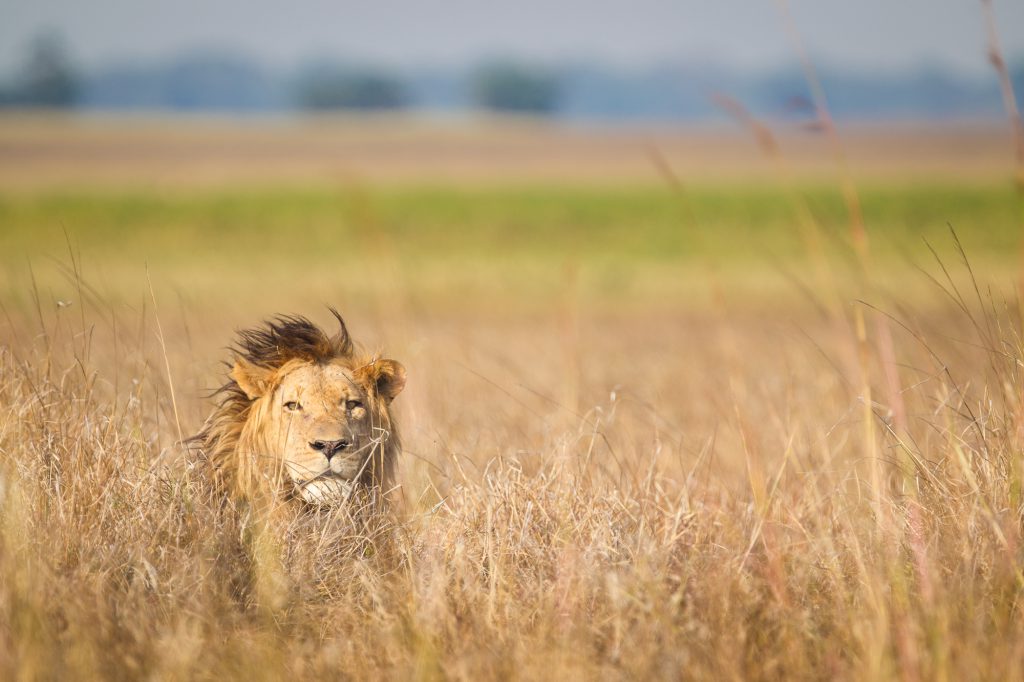 One morning, we saw two enormous male lions napping next to the path several kilometers from our camp. That night I woke up, snug in my sleeping bag, to hear the lions’ nerve-wracking calls. Worryingly, they came closer and closer over a few hours, so we decided to move from the flimsy pop-up tent to the vehicle. Normally, a lion won’t bother you if you’re quiet and zipped inside a tent…or so they say. But we were worried the lions might decide to bed down around the remnants of our camp fire to cut the evening chill. If so, we could have been stuck in the tent for a very long time. 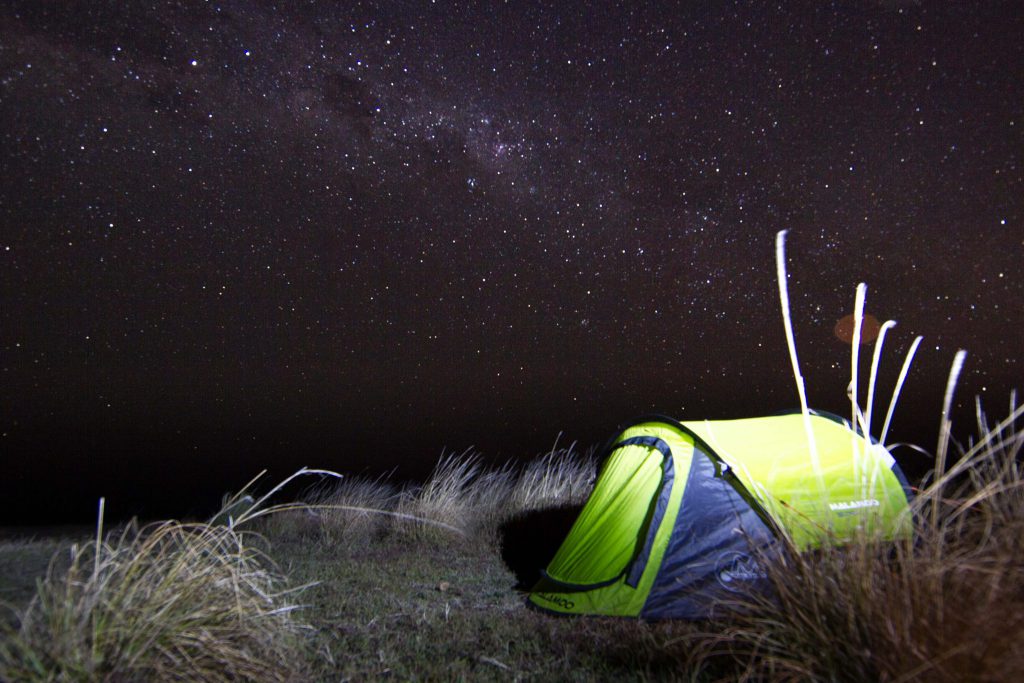 One more powerful roar, and I scampered out of the tent, through the darkness, and into the Pajero about ten meters away. Ashley struggled with the tent zipper behind me, then heard a “hrrmph” as he bolted for the vehicle. Peeking out of the sunroof with a headlamp, we spotted one of the lions staring at us from less than 20 meters away on the other side of the clearing. He had plopped down with a “hrrmph” as Ashley emerged from the tent. The lion stood up and brushed past our camp, glaring at us on his way. A few minutes later, the other male passed us. We heard their powerful calls getting further away, eventually joined by a new chorus far in the distance, and we decided it was safe to go back to the tent for some fitful sleep. Close call!

Now that I’m a contributor at SA 4×4, maybe I’ll get a little more respect next time I take my Jeep in for a service…but I doubt it.