Here’s a copy of my recent article “WAR: Park rangers under fire in Virunga National Park” that was published on the Africa Geographic Blog. It’s a really sad story unfolding in the eastern Democratic Republic of Congo, and the park could really use some support–this is how you can help a gorilla ranger.

I recently wrote an article for Safari magazine, “Into the Volcano”, extolling the awesomeness of hiking Mt. Nyiragongo in Virunga National Park, Democratic Republic of Congo. Mt. Nyiragongo is among the most active volcanos in Africa, and its crater holds one of only five molten lave lakes on earth. Hiking Mt. Nyiragongo is indeed an incredible experience, but sadly, if you’ve decided to plan a trip in the near future, you’ll have to postpone.

The region surrounding Virunga National Park has once again erupted in violence following several years of relative peace since the end of the Kivu Conflict in 2009. The renewed fighting has squelched the promising increase in tourism the park has worked to achieve over the past few years and forced a large portion of park staff to evacuate. Tourist activities, of course, have been canceled until further notice. Even worse, the fighting is threatening the park’s most famous inhabitants—the mountain gorillas. Virunga National Park is home to about 200 mountain gorillas, a whopping 25% of the global population. The greater Virunga region, which includes Volcanos National Park in neighboring Rwanda, holds over half of the world’s mountain gorillas.

Violence engulfed the park back in May when a mutiny among government forces led to a breakaway of a rebel army composed largely of former National Congress for the Defence of the People (CNDP) rebels involved in the 2009 conflict. These ex-CNDP forces had been integrated into the Congolese Army after the 2009 peace deal, but the rebellion occurred after relations soured with the DRC government.  The new rebel army is called M23, after the date the former peace deal was signed—March 23, 2009. Virunga is now a battle ground between the Congolese Army and the rebels, with M23 holding large sections of the park. Several rangers have been tragically killed so far in the conflict, and regular monitoring of the gorilla families has ceased. Mortar bombings, attack helicopters, artillery, and heavy machine gun fire are common within the park.

Conflict escalated through July. Bukima camp (the main patrol post for gorilla monitoring) and the park headquarters in Rumangabo had to be evacuated of most park staff and their families. They’ve been moved to a make-shift camp outside of Goma, which is itself facing increased unrest. Without tourism revenue, the park service is struggling to maintain rations for their rangers, who are working under extremely difficult conditions to try to protect Virunga’s wildlife. Park management is concerned that, as a consequence of the current conflict and forced evacuation of park staff, poachers may gain unfettered access to the park, and armed and hungry soldiers and rebels occupying the park may turn to poaching for food. Poachers’ snares represent a serious threat to gorillas, even though the snares are intended to target antelope (but check out this inspiring story about gorillas in Rwanda thwarting snares!). Looting and civil unrest prompted by internal displacement of people and disruption of basic resources is a major concern as well. 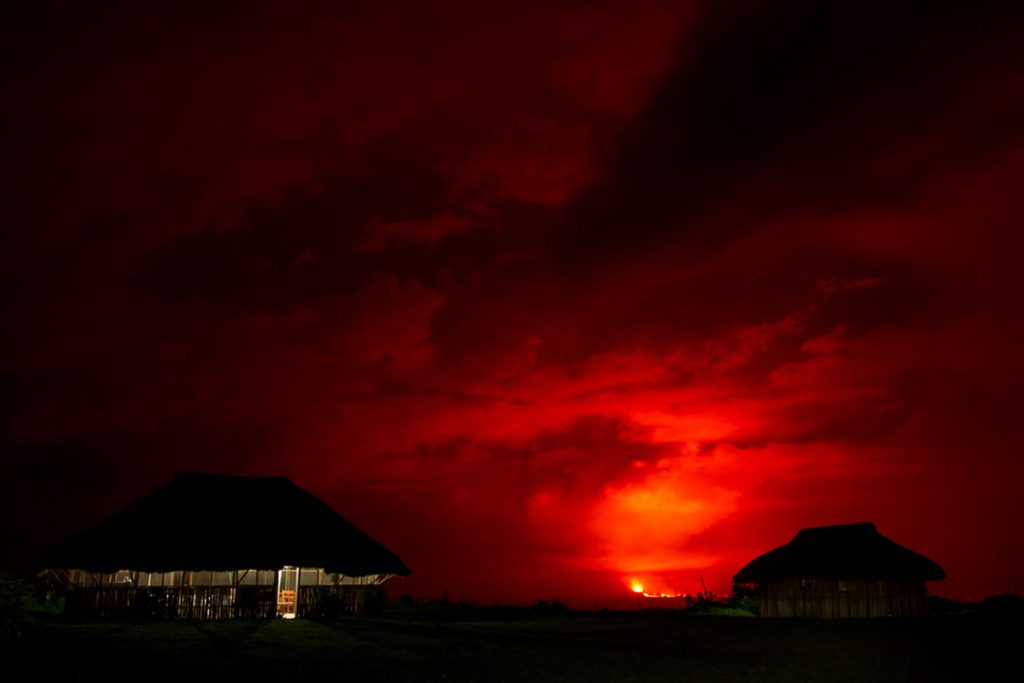 Further north in the park, The FDLR (Democratic Forces for the Liberation of Rwanda) and Mai Mai militias have tried to take advantage of the chaotic situation to gain ground. They’ve attacked several park patrol posts. FDLR is an extremely violent militia group, reportedly composed of perpetrators of the 1994 Rwanda genocide, which has continued to threaten safety in the park for many years and has killed a number of rangers.

Lots of bad news. But there’s good too. A small patrol of rangers was able to gain access to the M23 rebel-held gorilla sector in early August. They’ve been able to make contact with four gorilla families, Humba, Rugendo, Kabirizi, and Munyaga, that hadn’t been seen since the evacuation of Bukima camp. The team is still looking for three more missing families and will hopefully perform a census of individuals to make sure all are accounted for.

To stay up to date on the situation in Virunga National Park, follow their excellent blog, which is frequently updated by Chief Warden, Emmanuel de Merode. Also, you can donate through the website to support rangers with much needed supplies to support them through the conflict. Last week, Emmanuel requested sand bags to protect rangers and the orphan gorillas housed at Rumangabo against shrapnel and crossfire between the Congolese army and the rebels. He wrote, “6 dollars will buy 10 sandbags, enough to protect 2 rangers during an attack. Over time, they will probably save a rangers’ life”. Also, check out the video “End of a Species: Saving the Last Mountain Gorillas in a Country at War” to see what conflict in the park looks like and what the rangers are up against.

Morgan, your photos and articles are absolutely AMAZING. Thank you for sharing.