A few months back, I had the good fortune to join Unitrans’ Unite Against Poaching project as a photographer for a week-long trip to Kruger National Park. We learned a lot about the fight against rhino poaching in South Africa and the intense uptick in poaching incidents in the past few years. Here’s a copy of the blog post I did about the trip for Africa Geographic with a few bonus photos:

Dr. Cindy Harper and Frik Rossouw spoke about forensic investigations of rhino poaching crime scenes. One of these rhino horns is a fake! Can you tell which?

If you read Africa Geographic’s special rhino issue a few months back, or have even vaguely followed the news over the past few years, you know that rhinos around the world are in dire straits. Poachers have been targeting rhinos for their highly valued horns in response to an increased demand for rhino horn in the East. This massive uptick in rhino poaching stands to unravel the steady conservation gains made since the mid twentieth century for the southern white rhino in Africa, and it’s plunging the rarer rhino species around the world (Indian, Sumatran, Javan, and Black) into even greater peril.

Buy an Amarok at a participating Unitrans dealer and contribute to Unite Against Poaching.

Right now, rhinos need a lot of help. In South Africa, Unite Against Poaching is an initiative by Unitrans Volkswagen to support the fight against rhino poaching by channeling donations to South African National Parks (SANParks) and their Honorary Rangers for much needed anti-poaching equipment, dog tracking units, and forensic testing at rhino crime scenes. Since September 2011, the small group of 13 participating Unitrans dealerships has donated ZAR5.4 million, an amazing amount for the first year of the program, and they look forward to continuing the initiative next year.

A few months back, I had the pleasure to spend several days with Unite Against Poaching in Kruger National Park to meet some of the folks on the front line of the poaching war, to check out some anti-poaching demonstrations, and to participate in the darting and capture of a rhino to be translocated to another area.

First up was a presentation by Dr. Cindy Harper, of University of Pretoria’s Onderstepoort Veterinary Genetics Laboratory, on the Rhino DNA Index System (RhoDIS). RhoDIS is a database of DNA profiles of rhinos, which, so far, includes 5000 individuals. The DNA of confiscated rhino horns can be referenced against the database to find the source. Alternatively, when investigating a poaching incident, crime scene investigators can definitively link a confiscated horn to a specific carcass, and they can ID implements used in the crime, such as a machete used to hack off the horn or the vehicle used in the getaway, based on blood evidence. 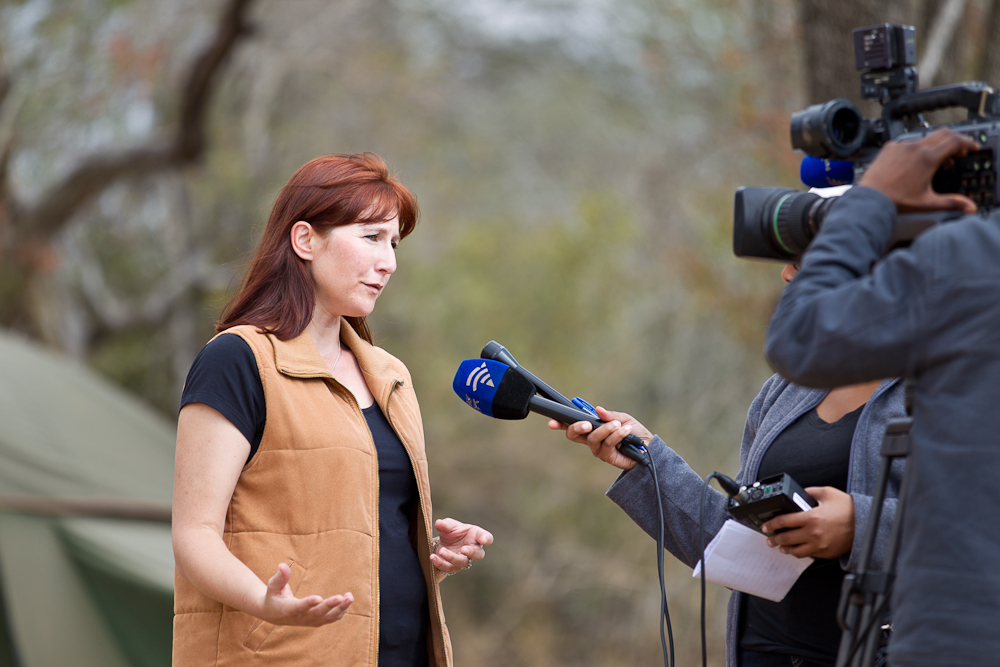 Unite Against poaching has supported the RhoDIS project with ZAR500 000 in donations that helps keep the lab running. This is extremely valuable in terms of prosecuting people involved in rhino poaching. Since June 2010, RhoDIS has been involved in 630 forensic cases. Frik Rossouw, Senior Investigator for SANParks Environmental Crimes Unit, echoed the value of RhoDIS and other forensic advancements in prosecuting poachers. Some sentences handed down have exceeded 14 years imprisonment. But, he also stressed that most people sentenced for poaching crimes are the poachers themselves, while top-level individuals in the syndicates involved have eluded punishment.

Prevention is Better than Cure

Preventing wildlife crimes is of course preferable to making arrests after the fact, and the rangers responsible for patrolling South Africa’s protected areas would prefer to catch poachers before the poachers manage to catch an animal.  Bruce Leslie gave a fascinating demonstration covering the equipment rangers use in the field, tracking dogs, survival techniques, and the myriad of snares and traps poachers use to catch animals. The latter had me nervous to set foot in the bush at all, lest I find myself hanging from a tree by my ankle due to a well-placed whip snare! 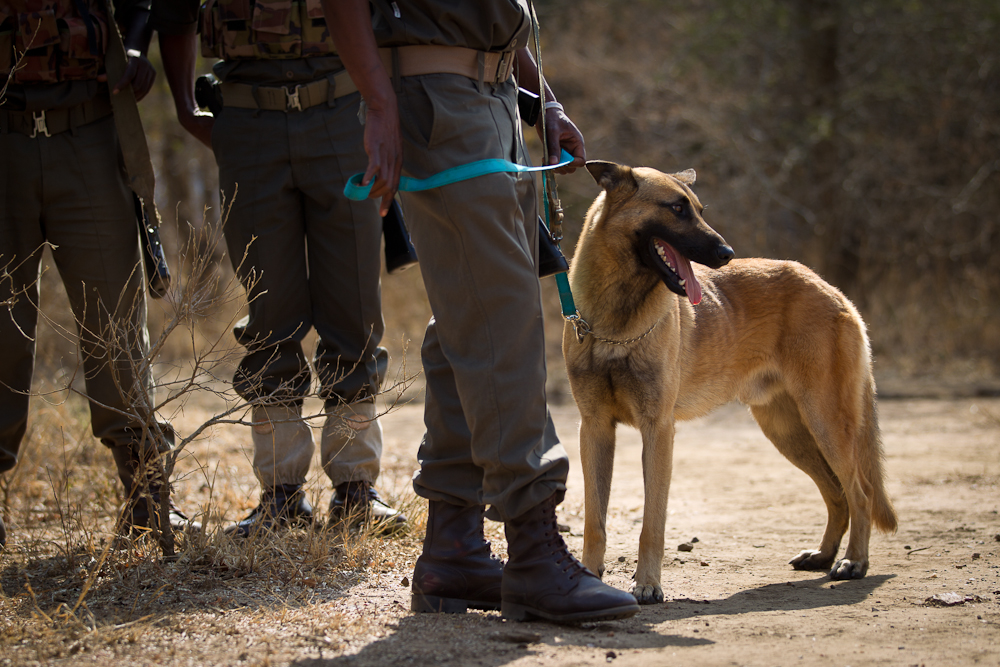 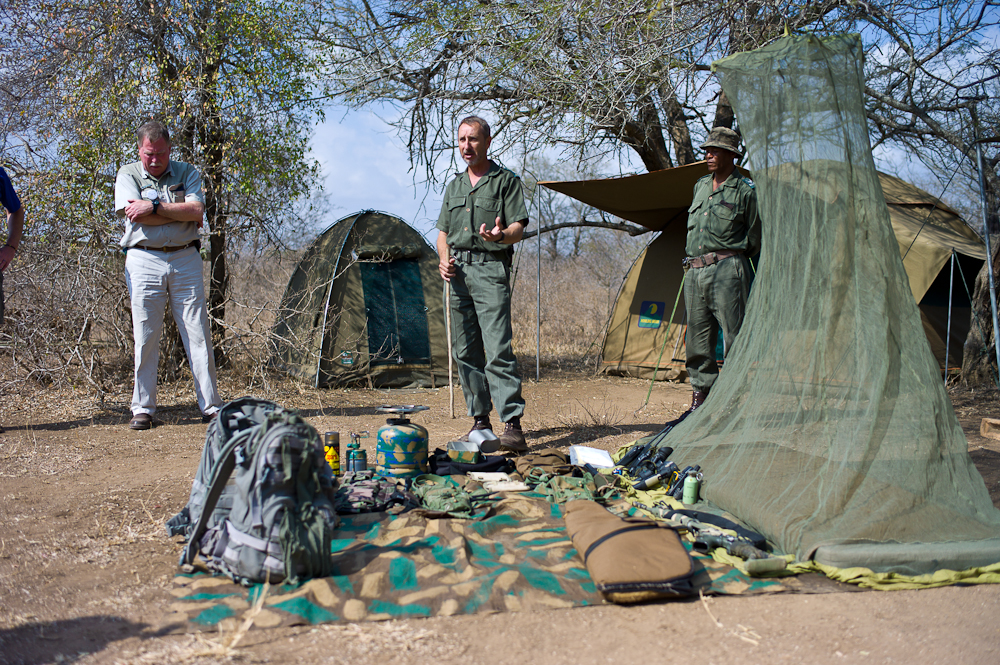 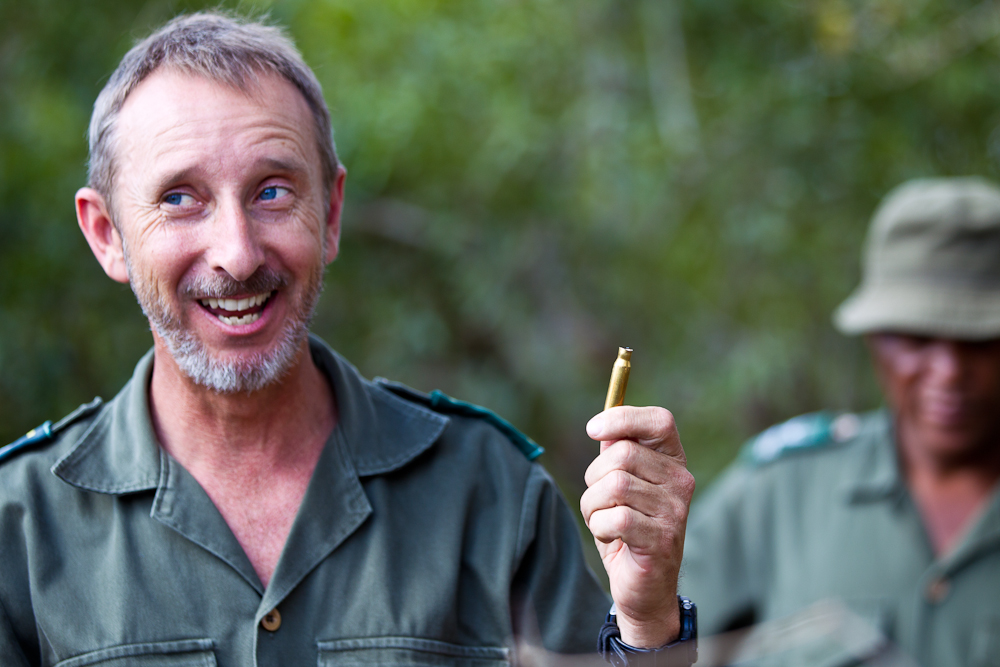 Bruce Leslie gives a demonstration on bush survival skills. A ranger showed us how to start a fire with sticks and dried grass. Mr. Leslie´s method used gunpowder and a piece of wire. 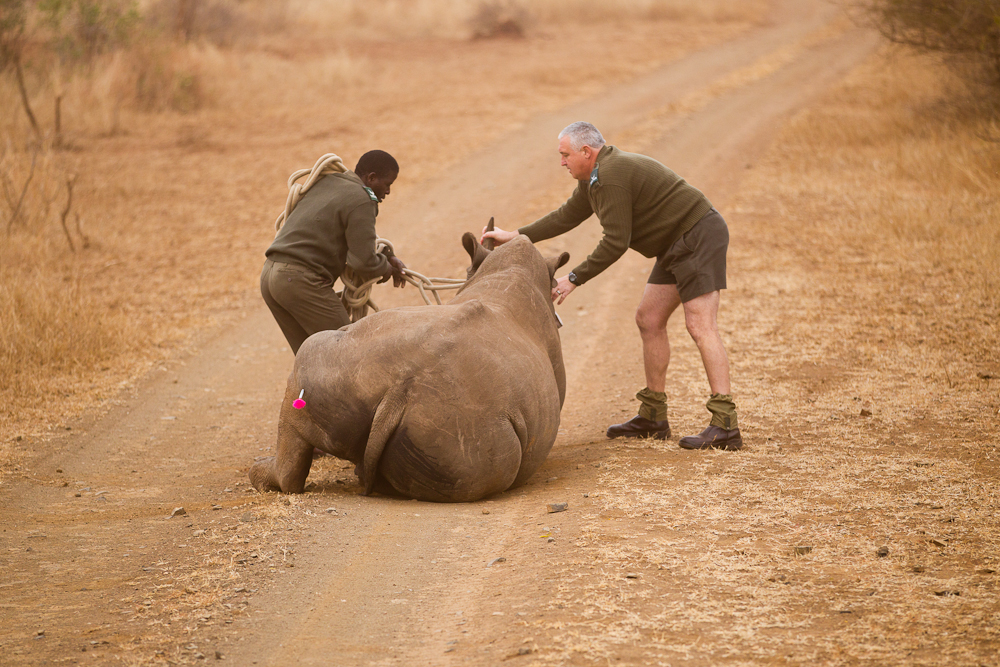 After the rhino goes down, its eyes must be covered and it needs to be positioned correctly.

Finally, it was on to the most exciting event of the week—a live rhino capture. Though poaching is certainly taking a toll on Kruger’s rhinos, Kruger remains an important stronghold for the two rhino species in southern Africa, and each year, a number of rhinos are captured for translocation to other parks or private reserves. The veterinary team set off in the SANParks chopper to find and dart a suitable rhino. As the drug began to take effect, the chopper herded the drowsy rhino to a rendezvous point accessible to the Land Cruiser crew, which consisted of operation head Marius Kruger, several veterinary personnel, and me (skilled pilot Charles Thompson won bonus points for putting the rhino down directly on the road!). Just as the rhino fell, Marius and the assistants bailed from the Cruiser to cover the rhino’s eyes and make sure he was well-positioned so that the vet staff could quickly and safely take all the required samples. The rhino was then given the reversal drug and lead, stumbling, to a container to be trucked off to a boma in Skukuza and, eventually, to his new home. 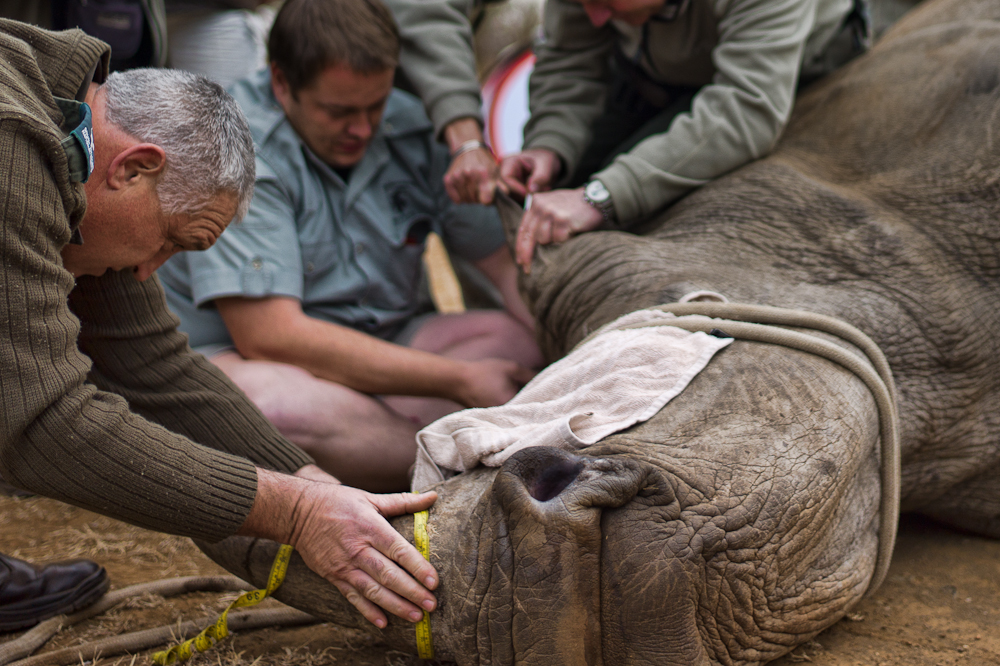 Veterinary personnel make quick work of taking the necessary samples from the sedated rhino, while coordinator of the operation, Marius Kruger, measures the horn. 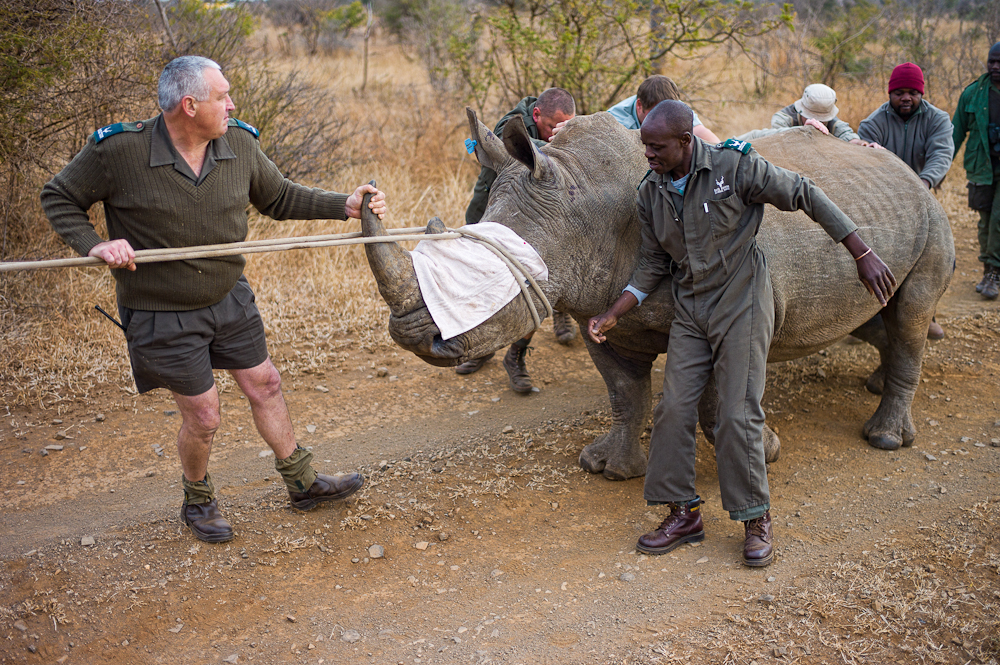 Kruger staff lead the drowsy rhino to a transport vehicle. 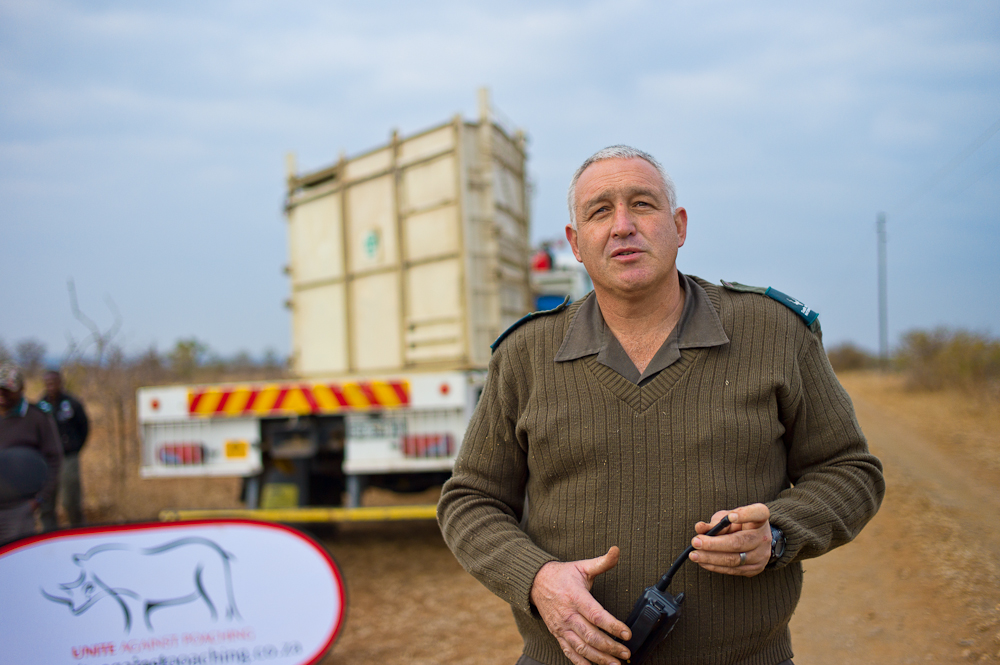 Marius Kruger discusses the successful rhino capture in front of the truck that will transport the rhino to Skukuza.

If you’re interested in supporting Unite Against Poaching, Unitrans donates ZAR500 each car sold through a participating dealership, or you can donate directly by contacting Linda Joyce on +27 11 795 5000

Great work Guys, Bruce you took us on a fantastic Napi Trail walk way way back in the early 90’s ,good to see you are still protecting our wildlife.
Regards
Mark.