Previously, guests hoping to see action at the “vulture restaurant” would park along the Oribi Loop road, clamber over the ridge, and look down on a bone field generally (in my experience) devoid of vultures. Now, guests can use a new parking area, hike 300 m to the hide, and settle in to wait for the vultures. Africa Geographic’s scientific editor, Tim Jackson, and I put the hide to the test. Here’s what happened: 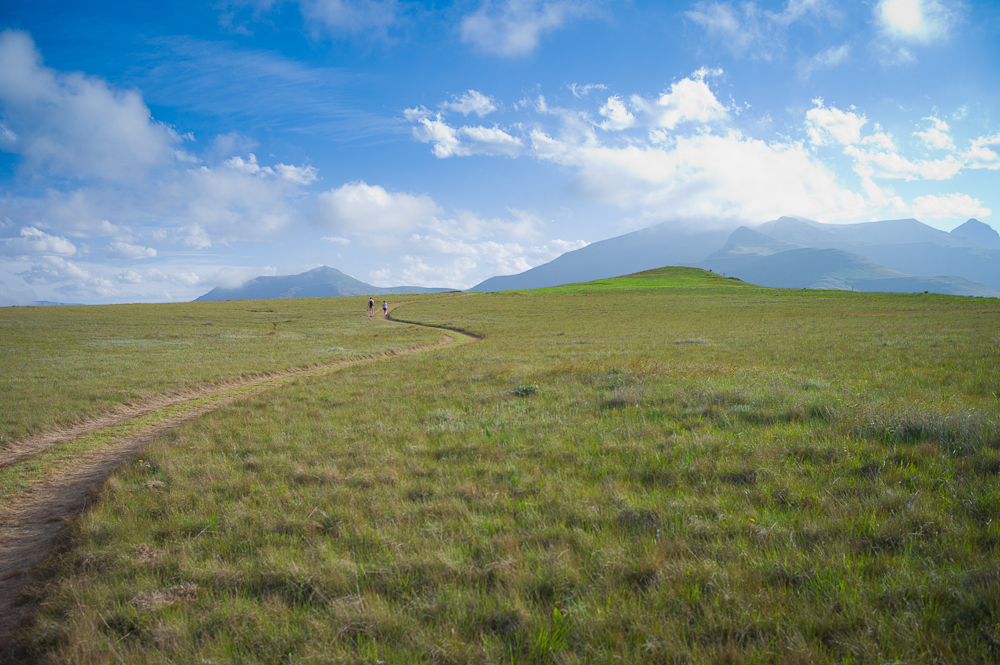 Visitors hike the path over the ridge to Golden Gate’s new vulture hide.

Day 1: A few Cape vultures circled overhead as we arrived for the hide’s opening ceremony. It proved quite a gathering, with more than 50 SANParks employees, honorary rangers, and bird conservationists in attendance. Tim and I raced back to the hide after lunch, eager to photograph the vultures that we hoped would land on the fresh eland carcass set out for them. But alas, none came. Jackals discovered the carcass in the late afternoon though. One ripped off a huge chunk of flesh and scampered away with it, presumably to feed pups at a nearby den. Late afternoon sure seemed a good time to see the jackals. 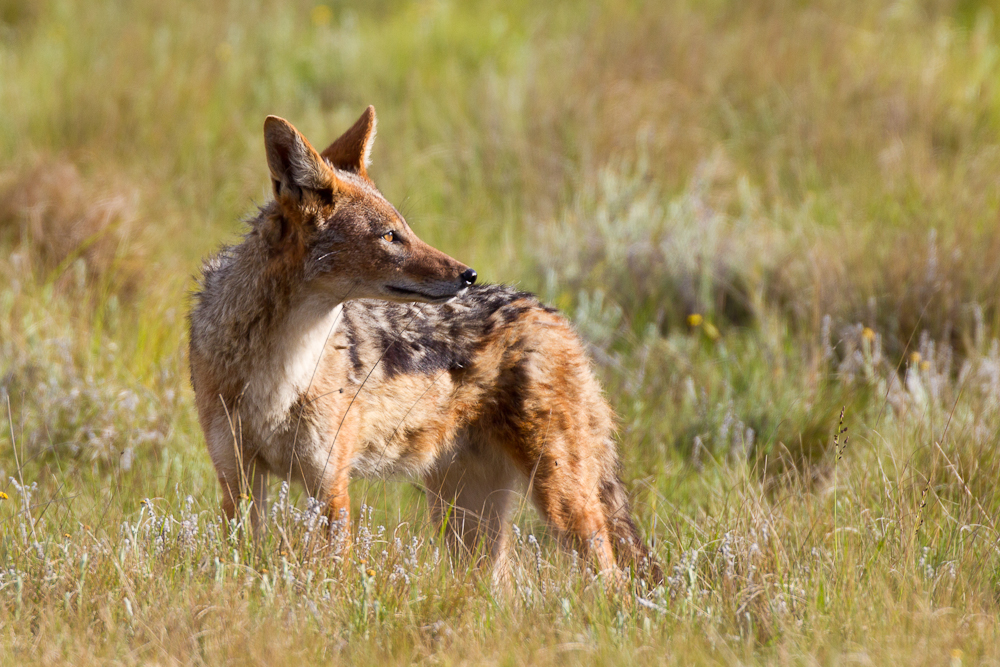 A jackal moves in on the carcass. 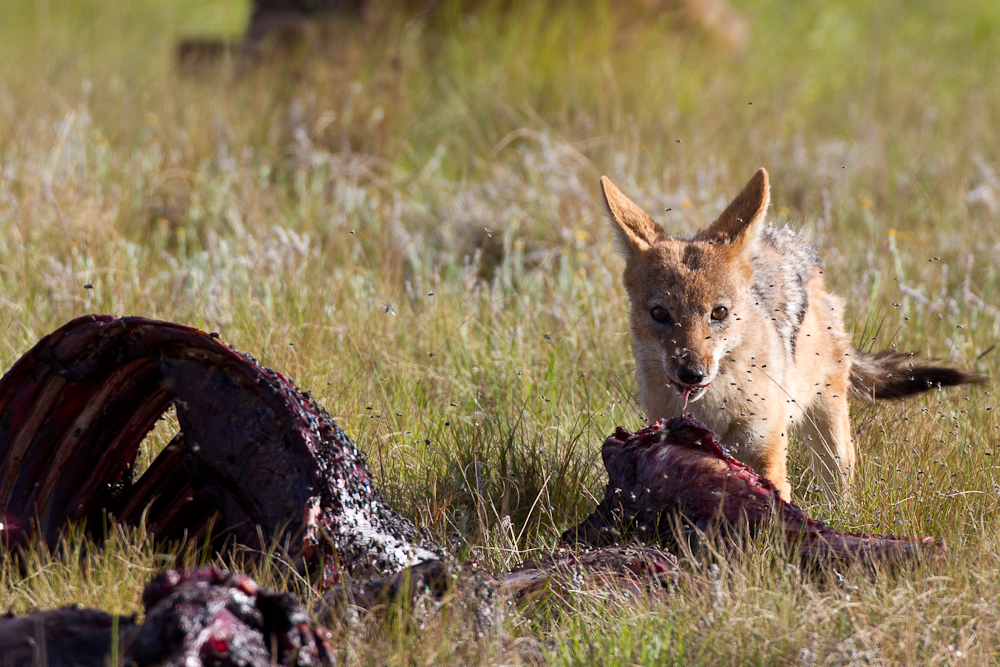 A jackal braves the flies to get a bite to eat. 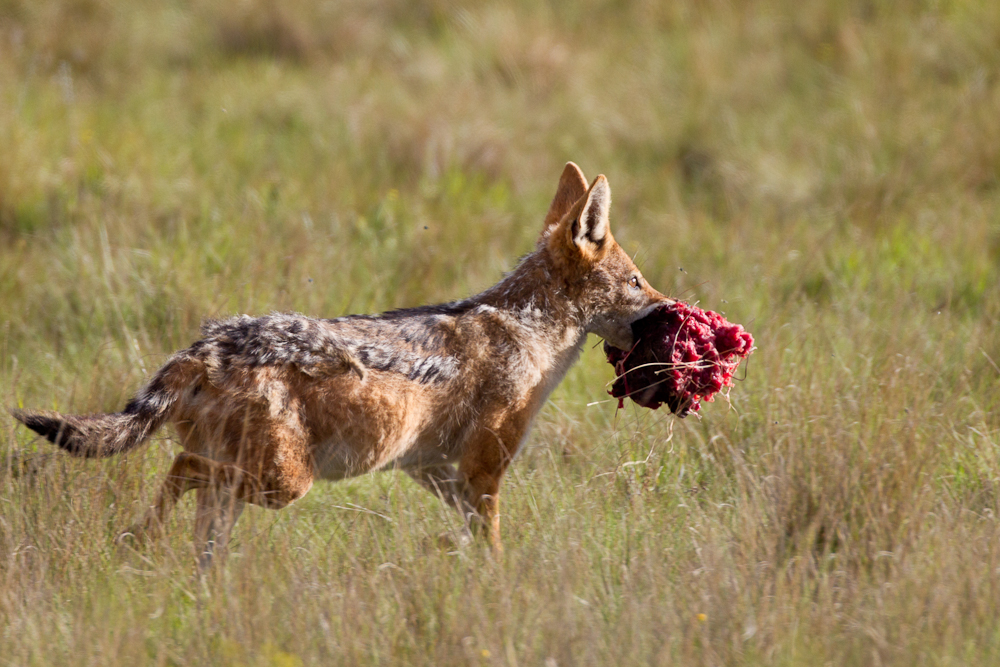 Then the jackal makes off with a mouthful.

Day 2: In the hide by 5:45, we hoped for better luck. The jackals had done a handsome job of picking the eland bones clean. A white-necked raven swooped in, grabbed a bone, and carried it to a far cliff. Three hours into our stakeout, we excitedly watched a bearded vulture swoop overhead. We jumped to our cameras, sure we would get great shots of it landing. But instead, it flew over to the far cliff, grabbed the raven’s leftovers, and disappeared down into the ravine.

Hours later, two Cape vultures and a juvenile bearded vulture circled the area. To our horror, instead of vultures landing in front of us, we were left looking at two brightly clothed tourists. For some reason, they’d climbed over the embankment meant to shield the walkway from birds on the ground. Needless to say, the vultures never settled.

In the afternoon a large group of Cape vultures, perhaps 20, circled but seemed leery to land. A ravenous jackal, gorging on the carcass, may have held them off. Eventually the rotund jackal waddled off, and the vultures circled lower and lower. “Great!” we thought, envisioning stunning photos of vultures squabbling over the rotting meat. Just then, the door squeaked open and in walked two visitors. The vultures circled a bit higher, then two more people came, and the vultures left. Argh! 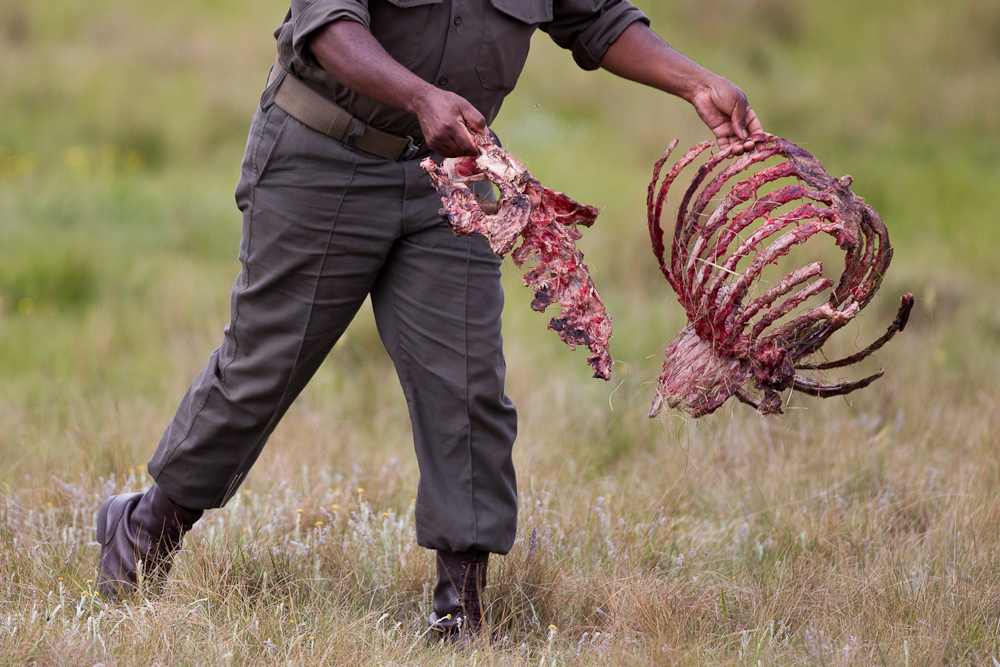 A Golden Gate ranger drops off some bait at the vulture restaurant.

Vultures didn’t land for us, but we saw plenty of other birds around the carcass, including these pied starlings. 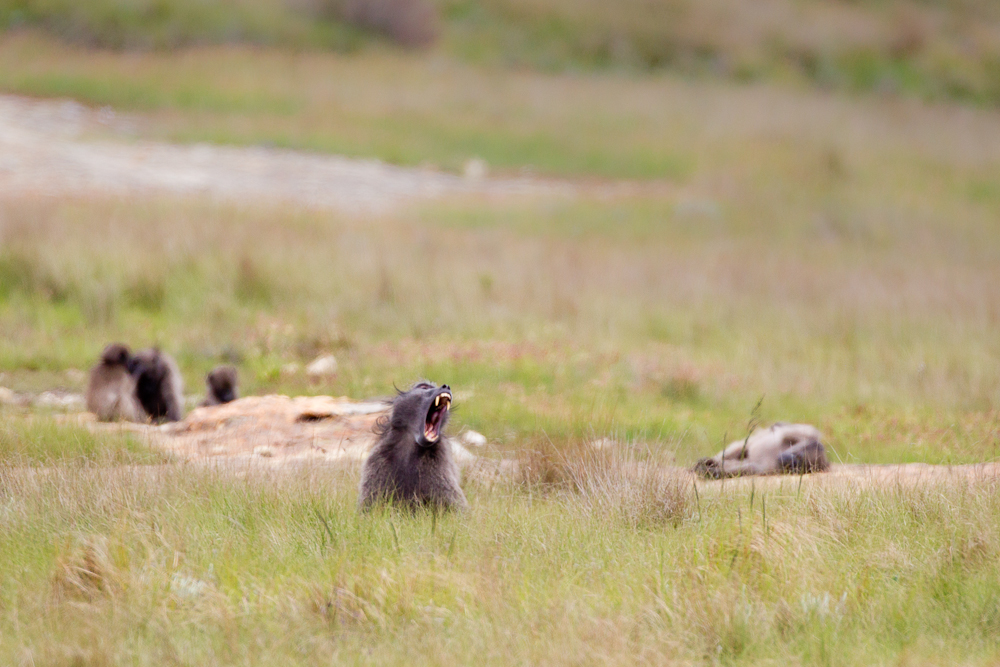 A baboon troop moved though without paying much attention to the carcass or the jackals.

Day 3: With one morning left for our vulture shots, rangers thankfully delivered a fresh carcass. Back in the hide at 5:45, more fat jackals, a nice sighting of grey winged francolins, and one awesome swoop by a bearded vulture. Still, no vultures landed. Noon struck, and we reluctantly set off home, leaving a heaping pile of meat to the jackals. 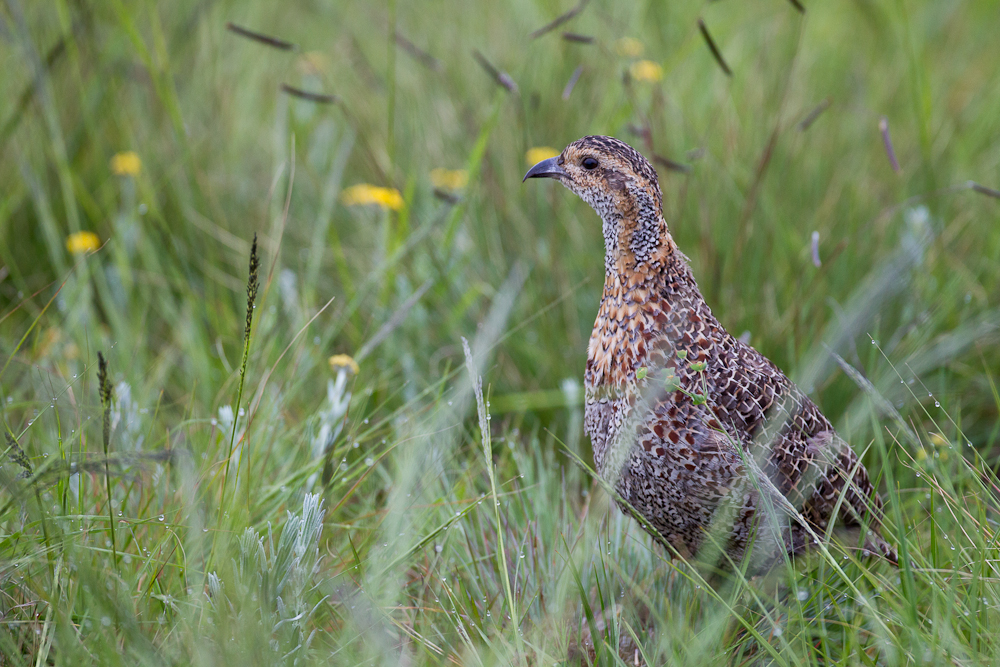 Grey winged francolins were the highlight of our third day in the hide.

The moral: After 24 hours in a prison-cell sized room, I’ve learned that photography at the new hide is not for the unlucky, impatient, or weak-of-bladder! Vulture landings are at the whim of the winds, weather, and other visitors – not to mention other carcasses that might be around. However, spending a chunk of your Golden Gate visit in the hide is likely to yield sightings of some of Africa’s rare vultures, and you’re pretty much guaranteed to see some interesting jackal and raven antics too. Better luck to future photographers.

For a more ‘techy’ look at the hide, see Tim Jackson’s post.