Here’s a reprint of my recent blog post over at Africa Geographic about photographing Kapotwe, the Bangweulu shoebill, for October’s cover story. I had so much fun photographing Bangweulu for African Parks and can’t wait to visit again!

Shoebills are a rarity that few get to see, but I was fortunate to spend a few weeks in Bangweulu Wetlands, Zambia, up close and personal, with cover model Kapotwe.* 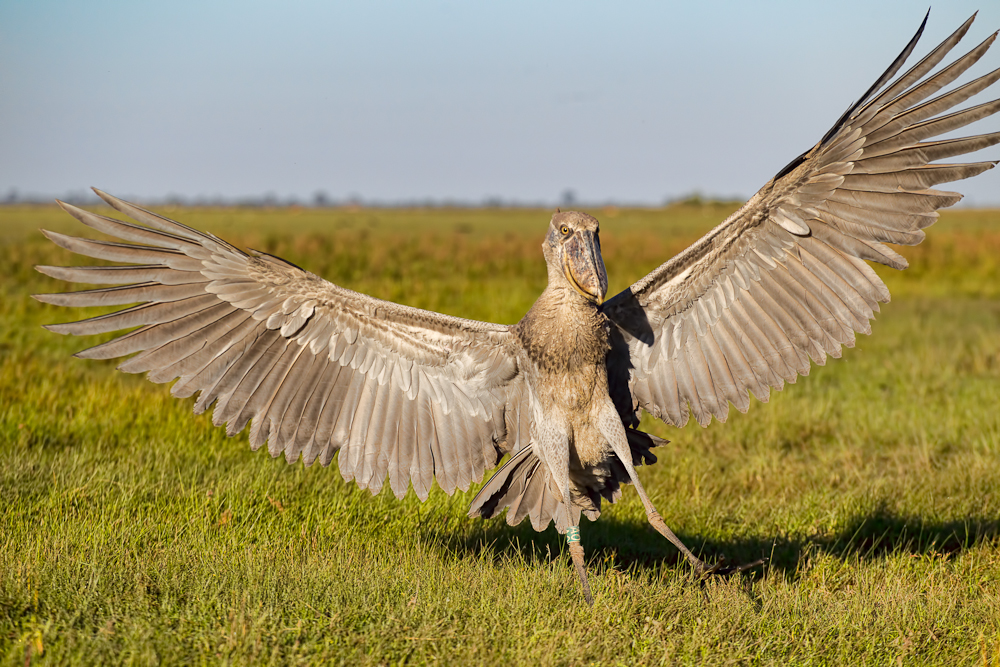 This isn’t Kapotwe’s first brush with fame. Earlier this year, Africa Birds and Birding (now combined with Africa Geographic in one AWESOME mag) ran a piece about the shady dealings of shoebill smugglers. Demand from private collectors and zoos for shoebills is driving an underground trade network that could threaten populations of the birds in the wild.

Kapotwe’s rise to cover-girl status began on a sinister note. Poachers kidnapped her from her nest as a chick and kept her in a small grass hut in a fishing village, where she was found and rescued by Zambia Wildlife Authority scouts. They took her to the Bangweulu Wetlands research station at Chikuni Island, where researchers Carl Huchzermeyer and Dr Ralf Mullers hoped to nurse her to health and return her  to the wild. Once she was pronounced healthy, she was free to go. But Kapotwe opted to stay around the research station for a while which, luckily for me, coincided with my trip to photograph Bangweulu for African Parks. 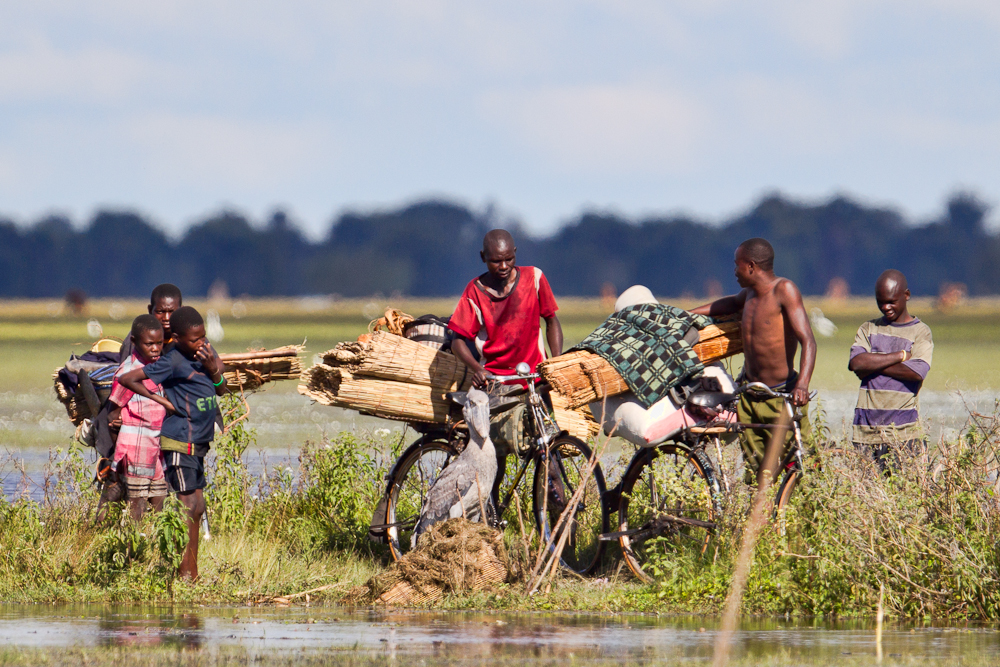 One of Kapotwe´s favorite haunts was the ´causeway´, an elevated path through the floodplain to the village, where she could keep abreast of the comings and goings to Chikuni Island and snag a fish or two when the parade of people lulled. 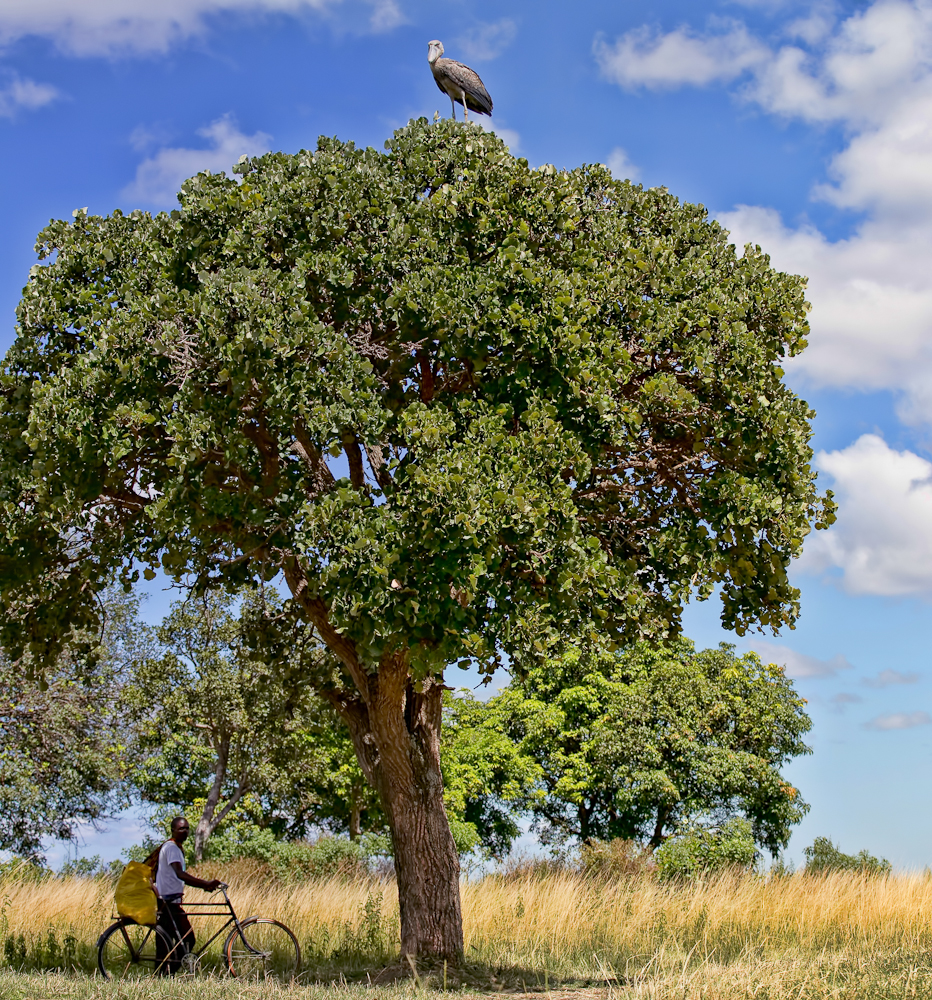 Sometimes she took a higher vantage point to scope the whole island.

Because Kapotwe spent her young life among people, she didn’t really know howto live like a shoebill –how to catch fish and avoid threats. She behaved more like a mischievous puppy than a wild bird. Every morning she woke us with her rooster’s call, then would spend her day investigating the comings and goings on the path to the village, getting into trouble with fishermen for stealing a few fish from their nets, and mingling with other birds and animals in the area. In the evening when we returned from the field, she would happily greet us with her bill-clapping call. 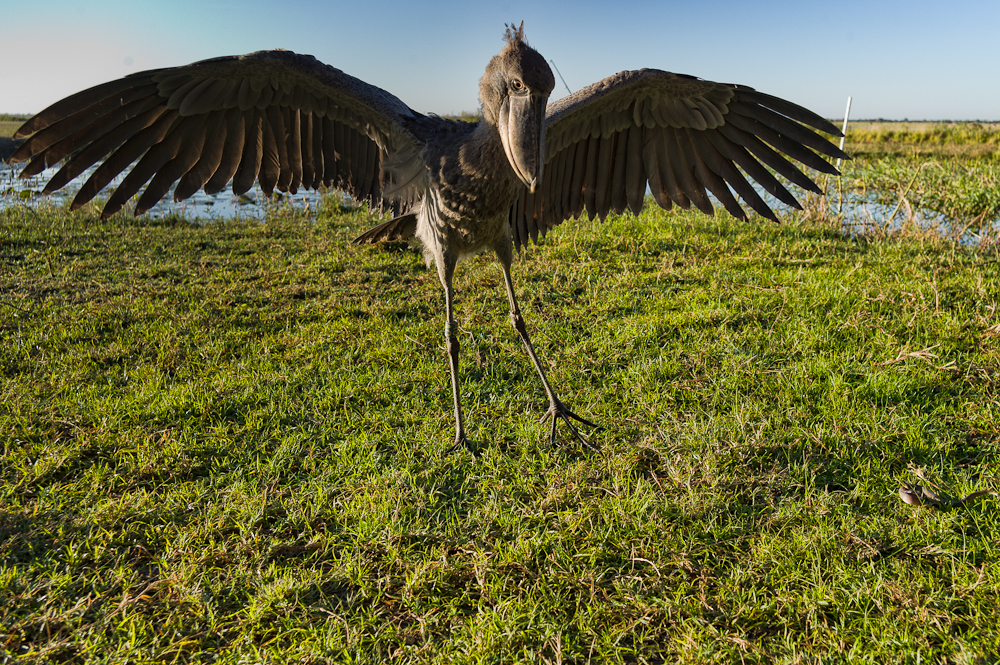 It was amazing to watch the inquisitive bird learn about aspects of her world. Here she´s deciding what to do about a herald snake she encountered in front of the research building (you can just make it out in the lower right). Friend, food or foe? I bet the snake was scared, but in the end, she let it be.

Kapotwe needed to learn to be wary of humans because not everyone she encountered would have her best interests at heart. But she’s an inquisitive bird and she often approached people with curiosity, and it was difficult to photograph her without catching her attention. I noticed that her favourite way to investigate people and objects is to gnaw on them, just a little, with her scary beak. I was a little apprehensive of this dinosaur-like creature! When I knelt down to get an eye-level shot, she’d come charging at me in a friendly, though deliberate, manner. Often, while I was photographing other things around the camp, I’d find her sneaking up behind me to see what I was doing. 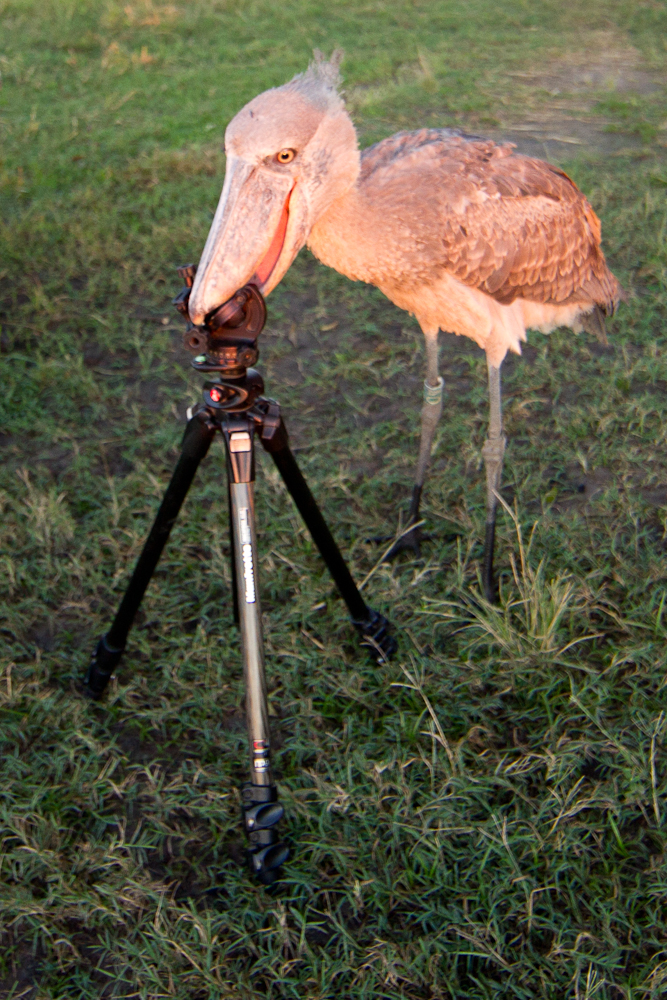 The researchers worried that Kapotwe might never venture out to her proper habitat in the papyrus, but the bird did eventually learn to fish for herself. Since my visit, she has started to explore further away from the research station and has become much more independent. She has had a few narrow escapes though – she once swallowed a hooked catfish from a fishing line and had to be released, and on another occasion she was briefly captured by a fisherman who thought she’d escaped from the research station. Now she’s doing well and fending for herself. Time will tell whether Kapotwe eventually integrates with the wild shoebills. 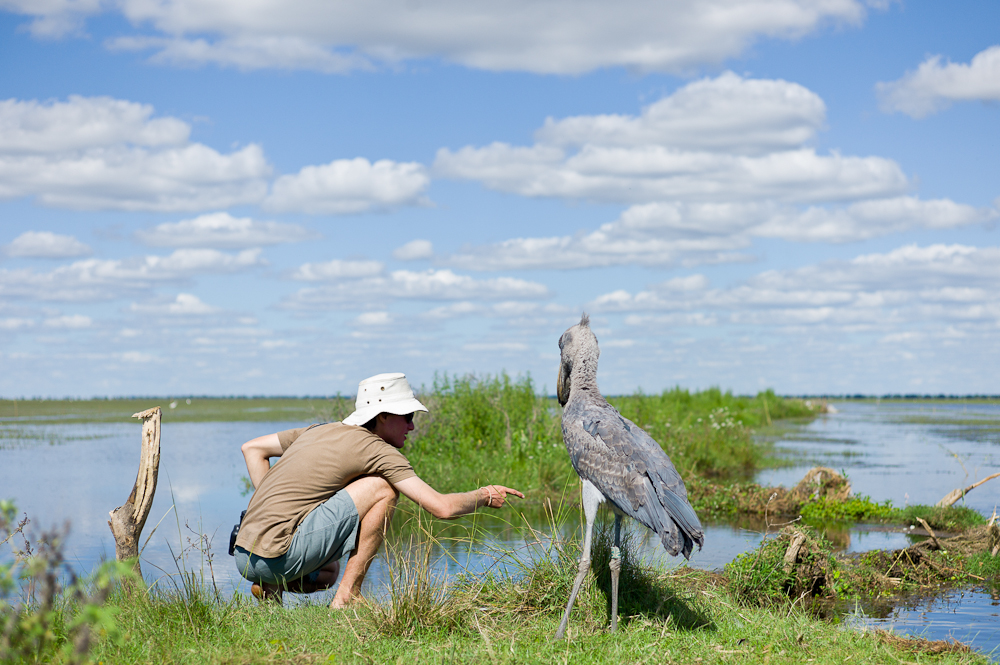 Fish researcher Carl Huchzermeyer was showing me some of the finer points of fish traps; Kapotwe was clearly taking note. 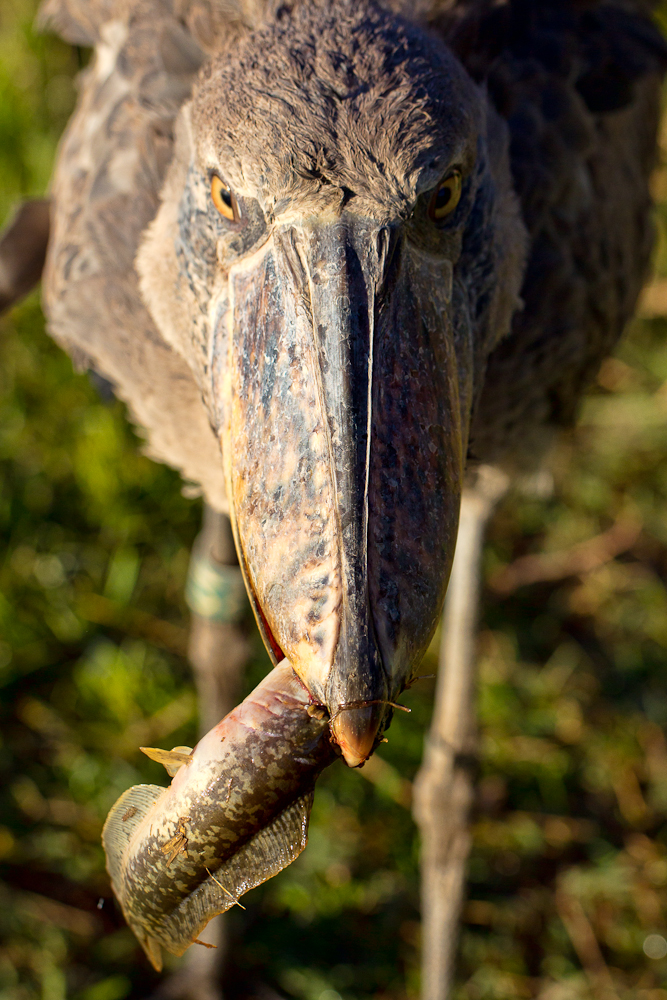 Kapotwe catches a fish!
Of course, Kapotwe would have been better off growing up in the wild, but there has been a positive spin to her life thus far: the bird has become an ambassador for conservation in Bangweulu. Many members of the local community, especially kids, have had the opportunity to observe this incredible shoebill and learn about the species on a much more intimate level than other students, which has elevated the appreciation for the importance of conservation in the region. Hopefully, the readers of Africa Geographic will share the sentiment!

Wow what an amazing bird and story. Thanks for sharing and loved the pictures!
LauraT
Redmond, WA USA

Great story you have here. I did not know about Zambia and the Shoebill. In Uganda ppl live side by side. The photo’s and Video I took were taken at a place where local fisherman protect the shoebill population. They know that it can bring in toarist revenue. Never knew a shoebill could be hand reared. They should include this in the BBC’s earth flight 🙂